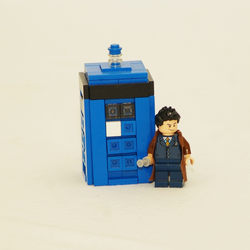 “Knight Rider, A shadowy flight into the dangerous world of a man who does not exist. Michael Knight, a young loner on a crusade, to champion the cause of the innocent, the helpless, the powerless. In a world of criminals who operate above the law…”

Knight Rider is a famous 80's TV show about a man named Michael Knight, who, with the help of a hi-tech talking car named KITT, go about the world fighting the forces of evil.

IMDb link to the show

Michael Knight can fit inside and both doors open. I have built this car in six studs wide. I feel this is the correct scale for an average car.

KITT- The Knight Rider by Sujiro

"Michael Knight, a lone crusader in a dangerous world. The world... of the Knight Rider."