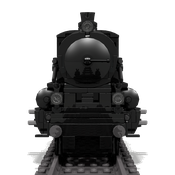 By I ScotNick I
286 comments

I have really waited a long time to finish this project. I started my first version about a year ago, but redesigned it several times to get it to look as close to the original as possible, and the last version was so good that I thought I'd submit it as an Ideas Project.

The engine is based on a GWR 14xx class engine. They were built between 1932 and 1936 by the Great Western Railways (GWR) and replaced an outdated class. In 1948 three railway companies and the GWR fused to form the British Railways (BR), so the engines got the BR's crest painted on each side. The last engine was withdrawn from service in 1959. They were designed for passenger duty on the branch line and were also operated with Autocoaches (Autocoaches were coaches were the driver could operate the engine from the coach). Four engines are preserved, No. 1420, the engine my model is based on, is currently in service on the South Devon Railway

Details of the engine:

The engine's details are sandboxes, handrails, a front light, detailed bumpers, realistic windows, side rods, and cab detail. The engine has the characteristic GWR letters on each side and the engine number 1420, but there would also be stickers for the round GWR logo and the BR crest. The engine would come with two minifigures which are of course a fireman and a driver. The engine can run freely on all Lego tracks. You could also recolour the model and build Oliver from Thomas and friends or make it black to resemble engine no. 1501 from the movie The Titfield Thunderbolt. The engine itself has 540 bricks, which isn't too much for a detailed model like this. I have also designed rolling stock  models of which I'll post the LDD files later some time if you want to build one of them.

The Autocoach I designed is actually a shortened version to fit the Lego Train standards (curves, switches), however there is also a longer version. The doors at each end can be opened. I didn't include the Autocoach in the project because it is just snot work where you can get the parts for the model easily as they aren't very rare. One function of the Autocoach is that you can upgrade it with Power Functions to let your engine go around your tracks. The Autocoach was used together with the 14xx class engines so they didn't have to uncouple the engine at the end of the line and couple it to the coach on the other side again. When driving backwards the driver was in the front of the coach and the fireman fired the engine at the back of the train.

What this project is about:

This project is about the engine only, however I have attached pictures with coaches and freight cars as well to let you see what can be done with this engine. Finally it would be the Lego Company's decision what to include in the product. I won't upload LDD files of the engine, but if you want I'll make the LDD files of the rolling stock publicly downloadable.

Here is also my flickr photostream with other images:

By I ScotNick I
286 comments