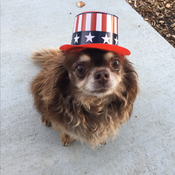 I’m Benny Kerns, I am 15 years old and I’ve always thought, why aren’t there as many train Lego sets as there should be? (At least the ones that are motorized and those that run on a rail.)  I have put together something that I think may make an interesting theme. The theme would be with trains and all of them have certain functions. The one that I have created is one that is transporting cold hard Lego cash but on the way to the drop off, someone put their trash cans in the middle of the track, using the trains integrated plow on the front of the train to knock the cookie filled trash cans out of the way to successfully deliver the money. The train has a winch with a hook on the end to latch onto the train car with the hook, reel it in and connect it to the main car to begin the delivery. The command seat has a detachable roof with a seat and two levers inside with windshields on both sides of the box.

The minifigure included is called Big Caboose. The names of the minifigures within the theme have names that are train related. The minifigures are have a yellow skin tone with either a stubble on their face or scars or scratches. There are 16 money tiles and 5 cookies and two green trash cans.