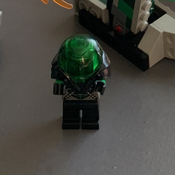 By Gibby0611
8 comments
What is it: This is Mechalodon, a with technology mutated shark that was designed for chaos.
The technology evolved the shark for moving on land, but his jets on back and legs make it possible to move under water aswell. The big fin on his back does he need for stability.
His right arm is a multiple canon that can spin around for total chaos.
Why did i build this: me and my son love robot’s, transformers and Lego.
This combo and the animal inspiration of the Bull mech from Monkey Kid was the pakkage of this idea. The shark that i have from the Lego set pirate bay 6270 was the idea to chose a shark.
Why this would be a great Lego set:  my opinion is that Big Lego mech sets are realy cool en good playable in a lot of sets, not only the theme that is was released with. For an example: me and my son use the Monkey kid mechs in his Lego city to makes some realy cool stories with and that the city will be saved at the and of the day.  But it is also a good combination for a pirate theme story. The Mechalodon can be a set that gets the attention while displayed to all ages.