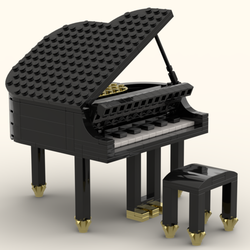 FirstMoldyBuffalo
23
This is a GoPro Hero 7 White. With at exactly 1,150 pieces, this Lego GoPro is close to the actual GoPro. [This is not to the GoPro camera scale]. This replica has the LCD screen with the GoPro symbol and the back light. The front of this camera has the GoPro symbol underneath the lens and the front light and on the side the mic and power button. On the top is the record button. I built this GoPro because I have one of my one and thought this would be something great to add to Lego Ideas, since they've never had one on here. I think this would make a great Lego set because it's something new and a lot different from some of the things Lego's produced.
23