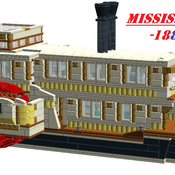 Hi! This is my Lego ideas project!

I wanted to create a steamboat of the 19th century for a long time so, three weeks ago, I started building it taking inspiration from a photo on a book. It is composed by 2957pieces and it is approx 52 centimeters long, 15 centimeters wide on the bow, 30 centimeters wide on the stern including the wheels and 28 centimeters high. The steamboat has also two decks: on the first you can find a living room with some green armchairs and a crystal table on which (where) are placed a champagne bottle and a glass. Connected to the hall there is the dining room with three small tables. In the corner there is also a piano and in both this two rooms there are some lights and paintings on the wall, as well as in the second deck.

In the back of the steamboat there is a balcony for the first deck and another one for the second deck.

On the second deck there is also a library, a poker table with fishes, a desk to read (a desk that guest can use to read and write or a desk where the guest can sit down to read) and write something, an area to seat down and to observe the landscape. In the project cannot miss the command bridge with the helm and other fornitures. On the roof I have positioned the two famous black steamboat chimneys and a panoramic window. In the project there are five Lego minifigures, the Captain, a Waiter, three Guests: husband and wife and an old man elegantly dressed. The decks are removable from the structure of the boat to interact with the minifigures.

This steamboat isn’t my first project but the fourth. The first one was a motorhome that was nice for me: my first creation for Lego ideas to know how  Lego ideas did work; it wasn’t a success...but a few years later I decided to retry with another project that I considered nice but ,unfortunately, Lego ideas didn’t accept it. It was my mistake because I didn’t read the rules carefully before sharing my creation. After that I read the rules before making another mistake.

Finally I understood where I was wrong and all other rules so I began to build the third project that was a steamboat bigger than this one but wonderful for me. I didn’t share this project because it was composed by more than 4000 pieces and I knew that the maximum number of the pieces accepted is 3000. I loved and I am still loving that project and I didn’t want to give up so I have rebuilt the steamboat but this time smaller than before; and now ,after four years since the first project (when I was twelve), here I am.

I hope you will like it and I thank you for the support.