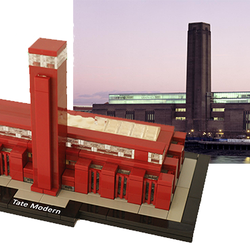 This is a LEGO Architecture model based on the Tate Modern in London. The Tate is  a Museum in London, where are placed famous pictures from Picasso but also great pictures from yunger artists. The Model is made for LEGO Architekture fans all over the world. It contains around 200 pieces and fits perfectly in the line of the Lego BigBen and Buckingham palace.

The Idea for this custom Lego set came from me in my hollydays, last summer I was in London and I saw this awseom building and I thought ''hay, let's build this in Lego''.