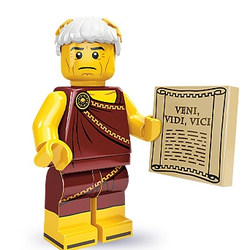 This LEGO set is inspired by upcoming human missions to Mars. According to some present projections we can expect first humans on the Mars surface sometimes after 2030. In this LEGO Ideas project, 4 crew members of the Mars orbital vehicle ‘’Elijah 1’’ are orbiting the Mars and making preparations for landing on the Mars surface to collect some soil and rock samples.

As the Mars gravity is only 0,376 G and the air pressure is avg. 600 Pa the vehicle doesn’t need ablation shield and the fuel requirement for descent to Mars surface and ascent back to Mars orbit is much lesser than one required for breaking from Earth’s gravity. The command and orbital module is fully detachable from fuel tanks and rocket engines so you can use them for various space missions. The command module has the space airlock so the astronauts can exit the module and make needed repairs on the vehicle if needed.  This set can easily be combined with other LEGO Mars sets.

Land the MOV on Mars, collect soil and rock samples from the Mars surface, return the MOV to Mars orbit.