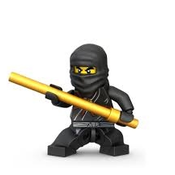 Welcome to the Extreme Paintball Arena! The four teams, Red, Blue, Green, and Yellow are all competing to be the best team! Who will win? You decide! All the teams have obstacles in their bases, so you won't capture their flag without a challenge! Red Team has a beam to cross, don't get knocked off or fall into the water! Blue Team has chains and Paintball Swords, can you acrobatically move through that? Green Team has a ladder, can you make the slow climb without getting knocked off? Yellow Team has Paintball Spheres firing up from the ground, don't get hit or your out! Can you climb up the middle structure and get the hight advantage? The game's in your hands! All the paintball players have special paintball guns, cool masked faces (like their head is masked too), and all the pieces LEGO has made sometime in their history! I did NOT make any of the pieces in this set! (that was for LEGO.) So, if you like it, and you would like to see this a LEGO set, Vote, and if you want to see ALL my activity, follow!

I would believe this would be a good LEGO set because, well, the pieces can be rearranged into a NEW paintball arena that YOU made. And LEGO hasn't came out with a sports set in a long time, i think it would be fun to have a new modern sport, and having fun with a sports LEGO set would be cool. I know lots of people (I personally know) who would LOVE to have a sports theme set out. Plus, i just think this could be pretty cool, just if you could put some stickers or something, then i think it could be perfect.