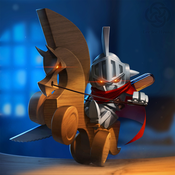 This enormous fighter which the is called The Titan by SDA (Sand Desert Army) is like the eagle in the sky. It is the biggest and baddest thing in the air and attacking it will lead to your dead. With it's giant propellers in the wings it can hover above the ground wich is very unique. To give The Titan some speed, The fighter got seven engines and for an extra push, the wings have the capability to open theirselves and give the fighter four more engines. The Titan is the perfect plane for warfare and you'll be glad it's on your side.

The Titan will have one pilot