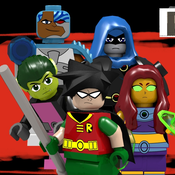 Straight out of cartoon network, it's Steven Universe. The set features the gem temple. Includes kitchen, Steven's room, and the warp pad. Figures include Garnet, Amethyst, Pearl, Steven, and Lion. The set has 276 pieces and would probably take an hour to an hour and a half to build. I also made another set from the episode ocean gem. ( last set in pictures )

This set has 119 bricks, and will probably take 40 minutes to build. Set figures include Steven, Connie, and Lapis Lazuli. Then set is based off the scene from ocean gem when Lapis Lazuli takes the ocean away, and Steven tries to stop her.

Another thing you can spot in my pictures, is that I have also created a smaller set. It has 170 pieces and would probably take 40 minutes to build. Figures include Garnet, Amethyst, Pearl, Steven and lion. In my opinion I like the small set better, but what do you think?

Tell me in the comments.

Thanks for viewing and helping me on my journey to 10,000 supporters!