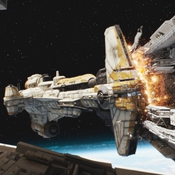 ​This is my new starship, the Sun Jumper. Loaded with detail, packed with play functions, and with great mini figures and accessories, this set belongs on any sci-fi lover's shelf.

The Sun Jumper is a modified version of an old cargo freighter used by inter-galactic shipping companies. A down-on-his-luck pilot bought this specific vessel and remodeled it to serve his purposes. He assembled a motley crew and now runs special shipping missions for rich space lords who need a shipment transported somewhere fast.

The Sun Jumper ship interior has a secret cargo hatch, a small bunk for long missions, the cockpit, two cargo holds, a gunners station, a working winch, a weapons and equipment rack, and a small passengers area; and is formidably armed on the outside. With a forward facing laser canon, a quad turret with full range of motion, a chin gun to defend the rear, two spring loaded ion torpedoes, and a swiveling twin blaster cannon on the wing, no pirates are going to be hijacking this ship anytime soon. The exterior includes a shield generator, multiple scanners, sensors, and transmitters, 4 primary engines and two secondary engines, a maintence hatch for play, bright floodlights, and boasts thick armor and heavy weapons.

The secret cargo hold can be opened using a lever accessible on the outside hull of the ship, and has removable seats on top of the hold's hatch to disguise the opening. The hold can be detached from the underside of the ship in an emergency.

The small bunk room has a cramped bed and a Tv console, with speakers. The cockpit has room for a pilot and a navigator, each with their own console stations. The first cargo hold is on the starboard side of the ship, near the wing. It can contain up to 4 3x4x2 crates and 3 2x2 barrels or 2 3x4x2 crates and 10 2x2 barrels. The second hold is near the rear cargo hatch and has space for the included security droid. The winch is in the second-rear hold, and you can pull the grapple out the cargo door, and can be automatically reeled back in by pressing on one of the engines exhaust detailing.

The gunners station controls the top quad-turret and the rear chin-gun. Located right in front of the entry ramp in the middle of the Sun Jumper, the station and it's weapons are ideal for fending off space pirates looking to rob the ship. The passenger area is on the port side of the ship, and has two high seats for any passengers wishing for cheap and fast transport.

This set will include 4 mini figures, over 15 various accessories, lots of cargo, and a multi-tasking security droid that can transform from a heavy crate loading droid into a heavily armored security droid in seconds. I'm not entirely sure of the piece count yet, but I think its somewhere in the range of 1000 to 1500 pieces.

Thank you for viewing and supporting this project by pressing the big blue button in the top corner of your screen! Brick on!