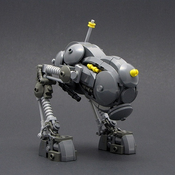 One night I had an amazing dream of a teenage alien boy called Zeph Storm who lived in an alien school called starflight University and who also was an intergalactic superhero.

So I thought that I should make a bunch of Lego sets based on this dream, so I will and it starts with this small, perhaps cheap, set I called Starflight University Entrance. It's small and easy to build, so hopefully it keeps the excitement going until I launch some bigger sets later.

Please support and thank you in advance.