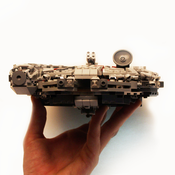 Combining two of my favorite things in the world, Star Wars and Lego, has always been dear to my heart ever since I can remember. The Millennium Falcon is arguably the most awesome ship in the galaxy, as well as the fastest. So, I began my building of this model roughly a year and a half ago from today. I had gone through upwards of four widely different concepts, and this is my absolute favorite. My attempts to create a new design for a Lego Millennium Falcon was as difficult as it was enjoyable. My goal was to build a Lego set that would be small enough to be relatively affordable, while still packing in as much detail as I possibly could. This is no "piece of junk"

This model has two quad laser cannons with window on top and bottom, retractable lading struts, an opening boarding ramp and cockpit with tunnel to the inside of the ship, piping, vents, damage marks, the all important holographic chess table, and what I believe is a very accurate color scheme.

In addition, I made it possible for the cockpit to allow any two of my brick-built characters to fit. Also, I give the option to quickly switch between the new and old look of the Falcon simply by swapping out the radar dishes, of which can be placed in the rear storage space of the Falcon.

To that I say, "The garbage will do"