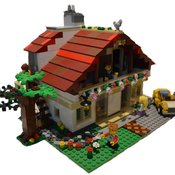 The old suspended bridge was a very dark red bridge. It had a very strong structure and you could see a beautiful view. But now it was out of date: the plants grew on it, the paint on it was taken, and even a large piece of it broke! But even so he was the most beautiful Lego bridge in the world. One minifigure had the courage to climb on it (no one knows how he managed to climb) named Luca Ideas. Of course he was surprised how beautiful he saw from above. The River of the Caramizs and the Valley of Creativity are very well seen. He always says: "The old suspended bridge is degraded, but looks more beautiful than ever!"