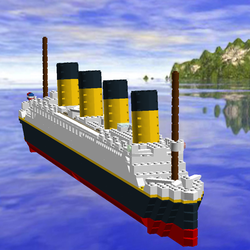 This is a very accurate and detailed model of the R.M.S. Titanic. It has a pointed bow, curved stern, little gear/round 1x1 propellers, and even leaned back funnels. It also has the famous crow's nest on the front mast, all of the deck fixtures and the right number of decks. The model features eight "watertight" compartments. To simulate the sinking, there is room to put weights in the first bow compartment and first stern compartment.

The best part of the model is that it can split in half just in front of the the third funnel, as it did on that fateful day. Ever since I watched Titanic, the Final Word with James Cameron and the movie, Titanic, on the 100th Anniversary, I have always wanted the Titanic to become a Lego set.  In fact, besides this Lego Digital Designer Titanic, I also built a similar Titanic model with real Legos in real life. If my model ever becomes a set, I hope it will be the one I made in LDD!