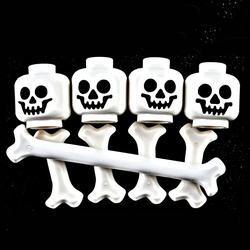 Friends is an American television sitcom, created by David Crane and Marta Kauffman, which originally aired on NBC from September 22, 1994, to May 6, 2004. It lasted ten seasons and is now in syndication. It revolves around a circle of friends living in Manhattan. The series was produced by Bright/Kauffman/Crane Productions, in association with Warner Bros. Television. The original executive producers were Kevin S. Bright, Marta Kauffman, and David Crane.

Sit on the most famous television sofa with your favourite friends: Chandler, Joey, Monica, Ross, Rachel and Phoebe!
Drink a cup of coffee with us in the bar that for ten seasons has been the theatre of many adventures of the legendary New York friends.
Don't miss the set "Central Perk", full of accessories and decorations. Make this project a wonderful Lego reality.

Much like the Big Bang Theory LEGO Ideas set created, I wanted Friends to have a moment of its own. After all, this is its 20th anniversary

Obviously, we can't have a Friends set without the friends themselves! Included will be:

vote now and tomorrow you can be the proud owner of this marvellous set!