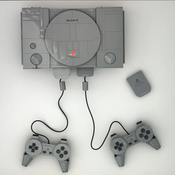 By robymuso90
156 comments
Guess which console made and continues to make history? We are obviously talking about the PlayStation, officially launched by Sony on December 1994, exactly 28 years ago (omg!).
The company said goodbye to the old cartridges, betting everything on compact discs. A choice that turns out to be successful!
The PlayStation represented Sony's rise in the videogame business: a total of more than 3000 PlayStation games were released, and were shipped over 100 million units around the world.
The most iconic games are represented by titles such as "Crash Bandicoot", "Final Fantasy" and "Tomb Raider", great sagas that still live on new generation consoles today.
Now let's talk about its features: in your Lego PlayStation, you can push the Power or Reset button, you will also be able to lift the lid by pressing the Eject button, insert your precious Memory Card and finally plug-in your two controllers.
So... What are you waiting for? Go back in time and start playing again with on of the most loved classics, since 1994!