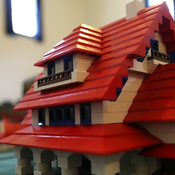 By arlen.mcc
0 comments
Based on the classic American Craftsman bungalow, although this variety is two stories. Blue siding with white and red trim, black gabled roof with hipped intersecting roof, chimney, and even a covered garage for your motor car!

This design is based off a house on Oahu called the Frank and Mary Bechert Residence (Manoa, O‘ahu). It is a great example of a picturesque Tudor-revival residence. This style of house appeared in the islands in the late 1920s-early 1930s, and it is one of a dozen which remain in Honolulu. It has lava rock features, open and enclosed rear lanai, and a sleeping porch, all of which were characteristic of homes in Hawai‘i during this time. The home was designed by architect Thomas Gill who established an office in Honolulu in 1898.