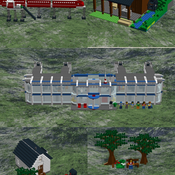 This lego project is an expansion on the 2010 airport set.  I added three gates on each side with a coffee shop on one side and candy store one the other.  Each gate has a desk and a TV that shows flight information.  Airport trucks can go under the side expansions to pick up bags and drop them off.  Four of the gates are bridges that can lower or raise to content to the planes better and can move from side to side.  I also expanded eight studs of the back to put stairs and two more walking gates.  To make it easier to play with the middle roof is open and the back middle wall can spin open.  Also the roof can come out easy on the sides to make this a 1255 brick idea.