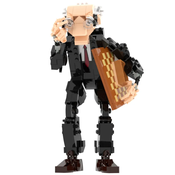 By deo10_01
111 comments
This emblematic British sitcom is turning 30 years in 2021. What's more, the character of Mr. Bean played by Rowan Atkinson is hilarious as it has always been. This compilation of Bean’s ridiculous situations keeps the audience on the edge of the seat even to this day.
My main motivation to create an idea based on Mr. Bean is that we are celebrating his 30th anniversary. I decided to make his unforgettable apartment and a combination of scenes from each of the 15 existing episodes. I also took into account the two feature films in order to make my model complete. There are also plenty of Easter eggs included such as Whistler’s Mother.
In conclusion, my idea is a compilation of Mr. Bean’s adventures throughout the years, and to make a tribute to our worldwide famous friend Bean.
Piece count: 1862
Minifigures: 7
Characters: Mr. Bean (5), Teddy, The Mini, Irma Gobb, Blind Man, The Reliant