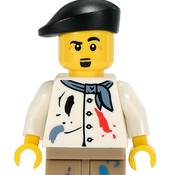 Some of the royal English soldiers have moved to one of their English colonies in Caribbean. Here on the colony they got a pier town which have a huge soldiers castle which thrones over the tropical nature. The villiagers live along the soldiers here, and they are very satisfied with that because in case of pirates looting, for the soldiers will defend them.

The set have three villiagers house with some random stuff and barrels on the pier. It is one royal castle with one cannon and a big room inside wich you can drag out for playbility and other things. The set got six royal English soldiers and one commandant figures plus six villiagers.

Thanks for me! Regards Marand17.