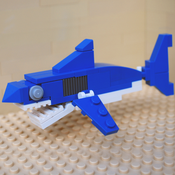 By Schwallex
125 comments
TL;DR: This is an idea for a new LEGO set, with any number of different animals built entirely out of LEGO. If you have a CUUSOO account, you can vote for it. When it gets enough votes, it will be turned into an official set that you can actually buy. If you don't have a CUUSOO account, please take twenty seconds to create one. It's completely free.

Then you can click the green "Support" button (to the right of the image above). You'll be asked how much you'd be willing to spend on such a set. Each animal will cost approximately four bucks, so if you'd like to have ten animals, enter 40, if you'd only need five, enter 20 and so on. You don't have to actually pay anything, not right now, not in the future.

You will also be asked why you like this idea. So you could, for example, specify which animals you like most and which you don't care about, or perhaps why the animals are a good fit for the sets you own, or why they make for a good present. Really anything you like. LEGO will then consider your feedback when creating the set.

And that's it! Of course if you're not convinced just yet, scroll down for more pictures, or read on for a more detailed description of this set, and why LEGO should make it.

Thank you for supporting. And tell your friends! We can always use more votes.

As a token of appreciation for reaching 600 supporters, here are free building instructions for the donkey and the goat.

More building instructions, and of course more animals, will be released as more supporters come in.

So spread the word, together we can make it!

LEGO already has a wide range of animals covered, but it's hard to find sets that work together to form a coherent collection with a consistent look and feel. From one-piece premolds to monthly builds, from Wild Hunters to Creator sets, from City farms to keychains, from Friends collectable series to thousands of MOCs — it's a crazy mix of creatures. Some are very blocky, others rather detailed; some cartoonish, others ferocious; some huge, some tiny; some are glued-together, while others are just B models or submodels of universal building sets not really designed with animals in mind.

Each of them serves its particular purpose nicely, but the purposes are vastly different, and there are only a few animals (often just two or three) in each of these categories.

Additionally, with the obvious exception of premolds, barely any of the animals work at the City scale. We've got so many cars to choose from, so many ships, planes, fire stations, even prisons — and so few animals. Hundreds of spaceship sets — but only one rhinoceros, from 1997, in red! 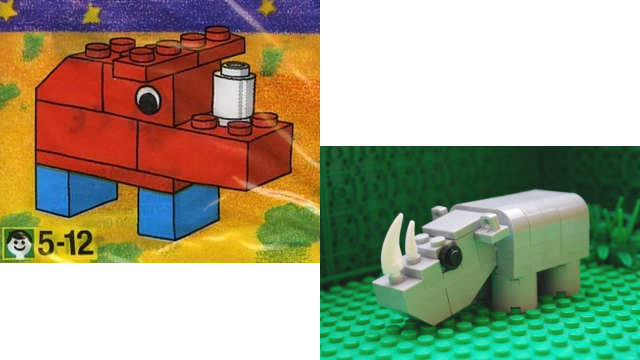 So what I am proposing here is nothing less than The Ultimate Collection of animals that actually do fit together nicely. Animals that are cute enough to work for children, realistic enough to work for adults, and featuring building techniques intriguing enough for both. All of that as close as possible to the City scale, which translates into many fun challenges to surmount.

According to the CUUSOO rules, do not expect this to be a series of polybags. Much rather, expect to see a nice collection of animals all in one set. It is only after bringing out one set that LEGO can determine how much actual demand is there, and whether expanding the set to a whole product line makes sense. (There's a second and third Minecraft set out now, but that wouldn't have been an option had the first set not been a huge success.)

So remember that you are voting for a single set, and remember that it is up to you how many animals it will comprise. Think of how many animals you'd like to have, and do the math how much you'd be willing to pay for such a set. And of course you can also specify which animals the set would absolutely need to include, and which you personally don't care about. Any information you provide when supporting will help shape the final set.

And one more thing. Sometimes you will see this set referred to as a "zoo", for lack of a better word or because that's simply the search term many people use when on the lookout for animals to extend their collections with. But you may have noticed by now that I don't really care for fences or walls or stables, let alone cages. I care about animals. And this is not meant to be a set that teaches people how to build naked walls or endless fences. That would be a waste of bricks, frankly. This set should really be all about animals and fun building techniques. Everyone can then easily build a zoo, or a farm, a meadow, a jungle, a shore around them. 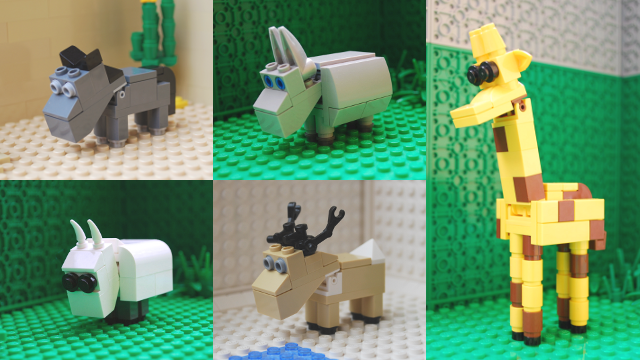 So with that out of the way, on to a few words on the proposed model designs you are seeing here — what guidelines I've been following to cater to both The LEGO Group and us LEGO fans, and what features you'd be getting.

1. Each animal uses different building techniques and/or seed parts. Different slopes, different tails, different legs, different eyes, different studs-not-on-top approaches — at the same time maintaining a consistent look and feel across the entire collection, and a scale that varies as little as possible. Obviously there's room for improvement here and there, but for the most part if you pick two animals at random, they will complement each other nicely.

2. Each animal went through many design iterations in Lego Digital Designer and actual bricks alike, to help optimize not just the looks, but also the sturdiness, the playability, the center of gravity, and the parts count. I also created draft building instructions to see how easily they can be followed by children of different ages, since some of the models feature peculiar SNOT techniques.

3. Most animals have at least one point of articulation. Heads, tails, fins, trunks, ears, mouths — everything that could possibly be made to move at this scale, does. Without compromizing the sturdiness.

4. No new molds! All models shown here use parts that already exist, and building techniques approved by The LEGO Group. That's the whole point of this line: using existing bricks, in existing colors, in original yet perfectly legal ways.

5. At the same time, each model typically offers a rare part or two. An absolute must-have for completionists like myself. If you tried to purchase them individually, you might end up spending a dollar apiece, plus shipping, and you are unlikely to get them all from one place. (I am speaking from personal experience.) So here you get a chance to save quite some money. 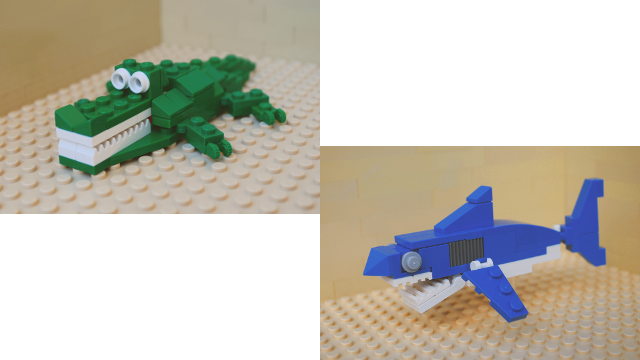 6. And I don't need to say anything about the general appeal of animals to children of all ages, and adult fans of LEGO alike. Here we are not talking about some obscure video game; we are talking about a subject matter whose potential is enormous outside of the core group of its supporters here on CUUSOO. We are talking about products that can be put up on any shelf in any toy store anywhere in the world, and grab the interest of passers-by young and old. This is not just a vague hope of mine, but rather I've been doing some "market research" that confirms this, by showing the animals around for about two years now, on a wide range of LEGO-related sites, and testing them on my friends and wife, the most merciless critic.

7. The part counts range from 26 to around 90. So the price ballpark is four bucks per animal on average (be it US dollars or Euros). You can just take the number of animals you would like to have and multiply it by four, and that will get you the pricepoint you should be expecting to see.

8. That means that at this scale, even a truly giant advent-calendar-style set of 24 animals would be perfectly affordable — just over a thousand parts, no new molds, no printed pieces, no minifigs, no stickers, no third-party licenses. (For comparison, both in terms of parts count and price, that's less than the Mini Modular Buildings, the Shuttle Adventure, the Friends Summer Riding Camp, or Creator sets such as Transport Ferry or Model Town House.) Though at the end of the day, how many animals the actual set will comprise will depend on what price range the 10,000 supporters of this project have specified on average.

9. And of course, your choice is not limited to the animals presented here right now. Lots and lots of other animals can be considered. People are already submitting ideas in the comments section. Drop in by, have your say! Obviously not every animal in existence can be built at this scale, but there are dozens that can. Walking, flying, swimming, prehistoric. Sky is the limit. 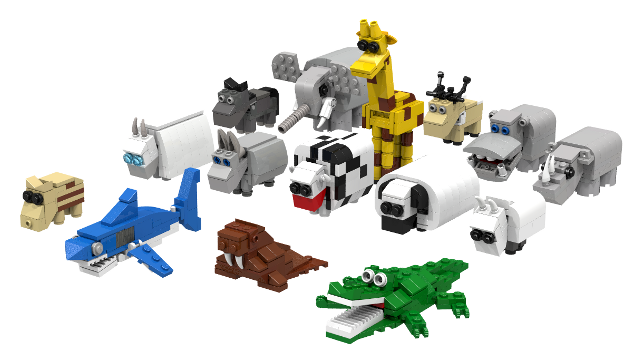 In fact I am working on more animals as we speak. Here's one final look at my current collection. Support this proposal and it can be yours!

- "Nice models. Unique, educational. Great gift sets. We want a zoo in the city!"
- "Using regular bricks makes it classy!"
- "Nice variety of building techniques. These models look like they would be useful in teaching new builders good building techniques."
- "I really really like that all of the animals look like actual animals."

Thank you for the kind words and your support. Keep it up, tell your friends, spread the word!

Image credit: Glen Bricker kindly offered his help in rendering the last image. In case you're not aware of it already, do check out his Cuusoo blog (and of course his own Cuusoo projects, of which he has quite a few).