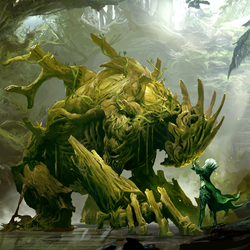 MattTheOsome
2
"Sir! Something is approaching on quantum scanners!"
"What? That's impossible, we're at hyper-speed!"
--Last transmission from log of a rebel freighter--

My goal with this one was to produce a fighter that looked like it could withstand Hyperspace travel. Said fighter, while being a single crew ship, would need to possess a drive core and heavy warp-durable shielding.

I surprised myself when I delivered.

I dubbed this ship the "Shark" for its sleek exterior and the angled tail "fins" that were added more as an afterthought than as part of the design process. The photos are from about a year ago when I first built this ship. 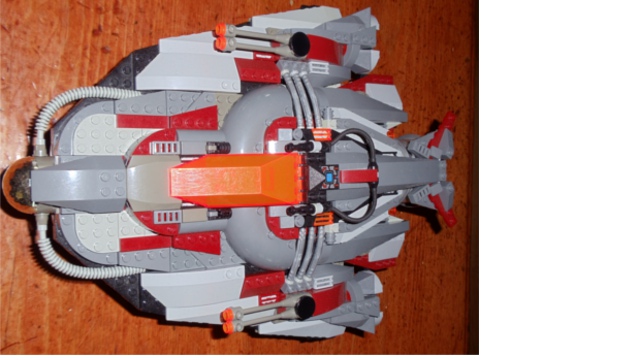 Here in this top down view (set at a funky angle because I had to rotate the picture to make it fit better) you can see the external piping which would serve to channel the energy from the on-board reactor to power the forward warp-shield pylon, located at the nose, as well as the channels that feed the twin turbo lasers. This ship is designed to intercept freighters and dreadnoughts while at warp when they are vulnerable as power systems are diverted to engines rather than defenses, so it's outfitted with high-power, armor piercing weapons systems. I would like to have included a compartment wherein you could put a removable reactor core, but the housing for the engine ate up most of the space in the rear of the ship. 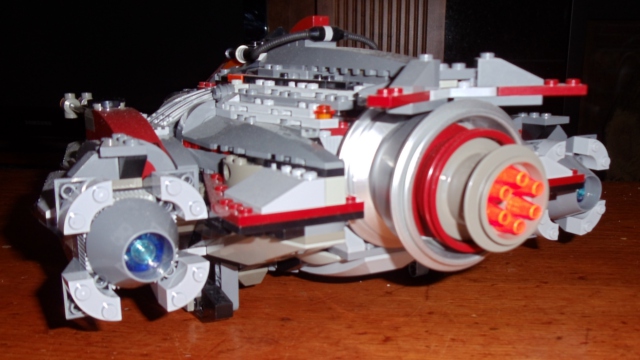 You can see what I mean by that here. The engine on this thing was built out of a wheel from the old Silver Champion formula racer set (that's the big silver one) which is a bit more than 6cm in diameter (about the size of a pop can). The point here for me was to strap the biggest engine I could on a one-man fighter. I added a pair of ion drives to the side to "balance out" the power of that beast. Ideally these would be for turning and in atmosphere navigation. 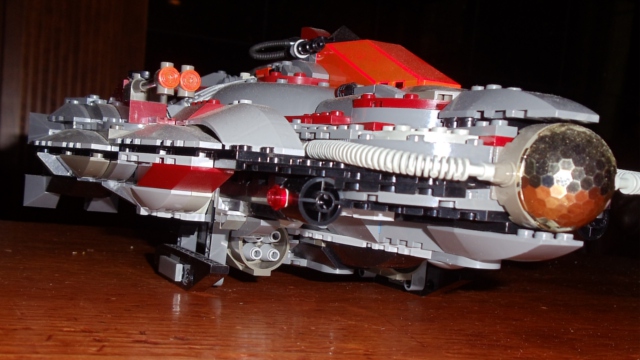 Aah, and here you can see the glorious weapons systems. (They are actually a bit smaller than some that I've had ships outfitted with, you'll see why in future projects.) In addition to the twin turbo lasers mounted on each wing, there is also a pair of missile pods and Magnetic Accelerator Cannons strapped to the underside of the fuselage. You also get a shot of the landing gear here. The runners fold forward for flight mode.

And that's that one. Hope you all enjoy it!
Keep watching my page for more projects and updates in the near future ;)