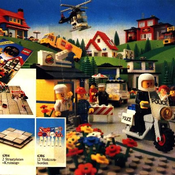 One of my favorite sets through out the years have been Lego Airport and Aircraft sets!! Some with amazing detail as have been the newer Airport and Cargo plane sets which have more realistic play features and more space (Wider Cabin) and a more Detailed Cockpit!

Being an Airline Captain myself, I have added several details that I love from the big Airliners I fly as well as the type of detailed stuff that I love to see in the Lego planes I've worked on through out the years! So I will try to list the Features I have added in this BOEING 747-400 Project:

- MODULAR DESIGN: You can easily remove the cockpit from the main body to access first class as well as the flight deck, rest of the roof can be removed easily for playability inside the main Cabin.

- DETAILED PASSENGER CABIN: Brown Leather seats for the First class Traveler, Red for bussines and Airline livery Standard blue for the main Cabin, Purser galley to prepare drinks and meals for the passengers.

- HIGHLY DETAILED COCKPIT: Features Captain and First Office seated Side by side in the IPECO LEGO seats designed for the 747!  Detailed Avionics and Main Instrument panels for all your long range overseas flights,  as well as dual Control Wheel/Yokes typical for this type of Aircraft.

- LAVATORY ON THE AFT MAIN CABIN: Detailed lavatory on the Aft cabin that includes Flush toilet and lavatory for long Flights!

- BRICK MADE WINGS: Highly detailed and Angle accurate wings as per the real aircraft.

- EQUIPMENT AND FURNISHING: The 747 is equipped with VHF/HF antennas as well as Standard Beacons placed in several areas of the Aircraft as well as Navigation lights as per Worldwide regulations! Satellite Antenna for Internet Wi-Fi is on the back of the Aircraft.

- POWERPLANTS: 4X LEGO ROYCE LR-211 with 52,000 Pounds of thrust each capable of lifting this bird to the Skyes!

- CABIN DOORS: Equipped with Forward and rear entry doors to handle the Volume of passenger and servicing to this commercial Aircraft. Fully workable as per the real Aircraft.

Model is made to work as a Playset and is bigger in comparison to the Red Aircraft from Airport Set 3182 they look great as a fleet as if you would compare a Boeing 767 and a B747 the scale ratio is the same. Cockpit is removed easily in a modular fashion to access the flight deck and also First class for boarding and playability.

The Lavatory door can be open with the rear Cabin door closed or opened. Model is light enough and sturdy for a kid to play and handle it!

Thank you for reading this small presentation and thanks for the support!

Measures: 60 cm in lenght x 46cm in Wingspan x 14cn in height from the Base to the lump!