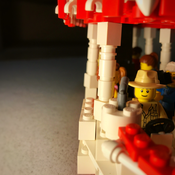 This model is based on the famous landmark from Disney's 1994 smash hit 'The Lion King.'  From when we first encounter the beautiful landmark as Simba is raised into the sky for all of the Pride Lands to behold, to when Simba returns to take his place in the Circle of Life, Pride Rock serves as a majestic background many times throughout the film and has become a highly recognizable movie icon.  It is for this reason that I believe Pride Rock would translate to a fantastic LEGO set.

- I constructed the model using LEGO Digital Designer, and my aim was to create a model that was as close to the film's portrayal of Pride Rock as LEGO-ly possible.  It consists of around 1,500 pieces, however many of these could be considered "optional" pieces, as they aren't necessarily essential to the model's infrastructure or core aesthetic (For example, a final rendering wouldn't have to include a huge baseplate covered in brown brick.  Instead, it could be a smaller baseplate modeled more after LEGO Architecture sets' bases.).

- FUN DETAILS: I included a couple of dens to add to the playability of the model.  One is "hidden" in the front by a hinged door, and the other can be found at the back.

OTHER THINGS TO CONSIDER...

- I crafted the mini Simba to serve as a rough representation of what custom LEGO Lion King characters could look like, should the project reach production.  In no way am I promising that LEGO would (or petitioning that they should) create custom molds for these characters, I am just stating that it would be a neat addition to the model.

- Thanks so much for taking the time to check out my model!  Your support is greatly appreciated!