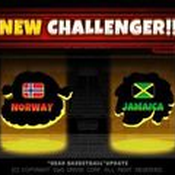 Ninjago Slimeball is my newest concept. The ninja are fighting a slime army that was created when Zane inadvertently turned Cole evil.

Zane was visiting Ronin in Stiix when he discovered the Teapot of Tyhran. Zane wished that he was normal, and Nadakhan started turning him into a human. Zane then wished for a new thing that he could do, and Nadakhan decided to turn Cole evil. Zane then banished Nadakhan by wishing that Nadakhan would leave Ninjago and never come back. Zane decided that defeating "Cole-Pow" was his responsibility. Zane decided to leave the other ninja behind at Stiix and fight Cole-Pow himself.

Zane's Titan Mech was stolen by Cole-Pow, and Cole-Pow turned it into a monster mech, much like what the ghosts did to Nya's mech. Cole-Pow, Zane, Nya, and Jay are in the set. There is the mech and a little ninja cave thing.

This is Death Gordon, signing off!