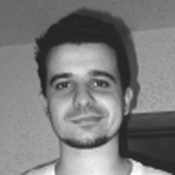 By Nuno_Costa
12 comments
I wasn't a huge Batman aficionado but I had seen all the movies up until 2005. All the Batmobile in those movies had fallen on my book as either in the 'ridiculous' category or the 'cool' category. For me all of them, the good ones and the bad ones, had a La La Land fantasy feel to them.

When Batman Begins came out in 2005 the new Batmobile, the Tumbler, felt real, felt awesome, and I couldn't fit it in any of the categories I had put the other ones, because,... well, in the words of 2005 Batman Begins Jim Gordon "I gotta get me one of those".

When 7888 came out I really liked it, although I had a few issues with its size and scale, specially if you compare it with the Joker truck it came with.
I remember thinking how cool would it be if I could try to build something as awesome as it, but smaller. The problem was I hadn't build Lego's for 15years. My parents still had my old parts stored somewhere, but my parts were very, very, VERY dated.

By chance I came across Lego Digital Designer and, well,... wow! I mean WOW!!!
I started building on it slowly, on and off for a year, trying to get a Tumbler that retained the 7888 feel but in a more compact size.

From the start of this project I decided I wanted to be able to recreate the The Dark Knight Trilogy iconic Tumbler scenes, such as Batman trying to save Rachel Dawes, taking her to Alfred for the Scarecrow's scare gas antidote.

So I imposed myself the following restraints:
- Seat Batman with his cowl and mask
- Seat 2 minifigures
- The frontal windscreen should retract to the back
- Sturdy enough to withstand collisions (I can throw mine off a table without losing parts)
- Assemble a decent Batpod using nothing but parts from the Tumbler

On my 16th version I finally had a version I was happy with. Happy enough to order the parts to build it. So I went to an online Unofficial Lego Marketplace, I don't know if I can write the name here so I am not going to risk it, and added all the parts from the LDD parts list to an 'wanted list', but didn't order it because I thought I should add the camouflage parts in the next day so I could have black and camouflage versions.
The very next day I lost everything I had on my hard drive. I thoroughly backup everything important, but for some reason I neglected a project that took a year, of my very scarce free time, to develop. I became very angry and bitter Lego wise because of the sense of loss and I completely 'forgot' Lego's for a while.

Then 76001 came out. I really liked the set. The 'Bat' is great ( I would only change the blue color parts with black and the red and yellow with grey) and it came with a 'Tumbler' or as I see it a 'Missile Launcher Armored Buggy'. I don't think it lives up to the Tumbler name because:
- Front wheels (central axle instead of the Tumbler's trademarked dual sided axle)
- Back wheels (2 wheels instead of the 4)(might overlook this if the front was accurate)

Even though I have my problems with the set, I've bought it.

I decided to go back to the part list (I had from a 'wanted list' from the online Unofficial Lego Marketplace) and from it rebuild my version of Tumbler from memory.

While rebuilding (from version 17) up to the current version (21) I've made a couple of changes, and stole the idea of 2 things from the 'Missile Launcher Armored Buggy' Tumbler:
- The back jet thruster
- The spoilers (I was using wing plates instead of flags). 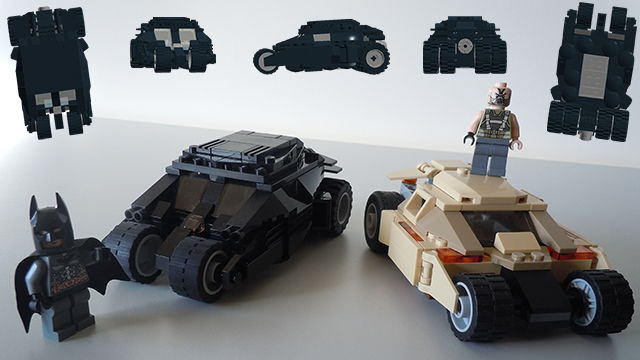 Image:
#Main picture: My Tumbler compared with the Tumbler from the LEGO® 76001 The Bat vs. Bane: Tumbler Chase Set (or Bruce showing off his new 2 seater Tumbler and Bane ruing not being able to bring a thug friend along with him)
#Floating on top: the 5main views from LDD snaps 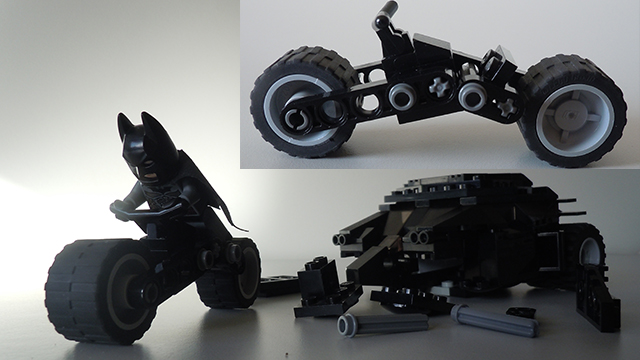 Image:
#Batpod - It's not stellar, but it is decent enough and it is build with nothing but Tumbler parts
Every Tumbler model should come with the instructions to build this Batpod
No need for extra parts.
If you follow the movie logic, when you have the Batpod, it's because your Tumbler is wrecked


I've seen amazing Tumbler projects, some of them far more accurate than mine, but those aren't as sturdy as mine (like I said before, I can throw mine off a table without losing parts or disassembling whatsoever). Other projects are sturdy enough for child play but are either less accurate or bigger than mine. 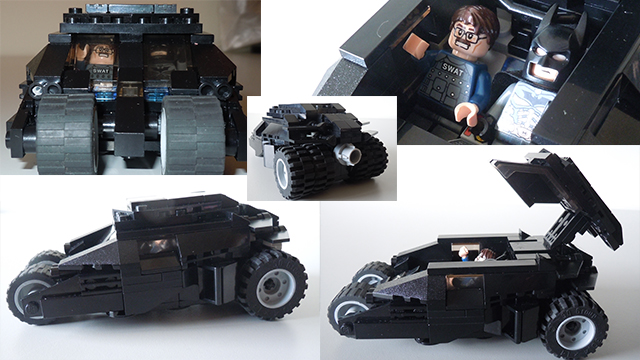 
I think there could be made 2 sets from this tumbler:
(and if these sugestions sounds familiar, they are! BrentWaller's 'Batmobile Tumbler Minifig Scale' sugested some of the things I am sugesting, and someone should have listen to him, because I think it would have made great sets (in my opinion)) 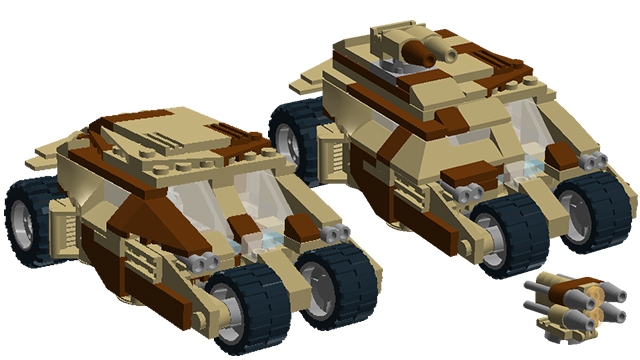 Image:
#Camouflage Tumbler (left) side by side with a Camouflage Heavy Tumbler (right) with Gun Turret assembled and Missile Launcher ready for assembly
(this set would only bring one Tumbler with the extra parts and instructions to change it into the Heavy version)


The following is a bit offtopic, but I think it's worth a mention:

All the Man of Steel, Dark Knight Trilogy (and maybe Arrow) sets should fall into the the latest line.


I am planning to create 2 more Dark Knight Trilogy projects and I believe that with these 2 other sets other than the ones I presented in this project you would have the entire trilogy covered:

But - "what about Ra's Al Ghul?" - you might ask.
without some major set to recreate iconic Ra's scenes such as the 'Gotham Metro fight' or 'Wayne Mannor fire' the only other place I could insert him in is my "I've gotta get me one of those!" set. He was Crane's boss after all. So in "I've gotta get me one of those!" add:
- Ducard/Ra's Al Ghul
- 2 League of Shadows Ninjas


I hope you liked what you've seen enough to vote.
I really think The Dark Knight Trilogy hasn't seen enough love from LEGO®

Thank you for reading and sorry for long project post