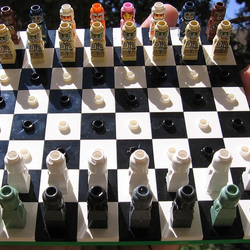 A long time ago in a galaxy far, far away, a great battle of good and evil was fought. Now you can relive the struggles of the courageous characters from the Star Wars saga in one of the world's oldest games, brought to life with LEGO Star Wars microfigs. The LEGO Star Wars Travel Chess Set puts you in command of the brave Rebel Alliance or the evil Galactic Empire! As you craft your strategy at each step, you move your forces to go forth and do battle. Use Chewbacca's skill with the crossbow to take out a sinister Tie Pilot. Or pit Darth Vader in a deadly lightsaber duel against his arch enemy Luke Skywalker!

The LEGO Star Wars Travel Chess Set uses microfigures from the Battle of Hoth game set. The set is highly compact and portable with all the pieces staying secure even while playing in a car, bus, train, plane, boat or spaceship! This could be a series with unique chess microfig configurations and box art for every Star Wars episode. A key of figure assignments could be printed inside the box (under a transparent inner cover plate) for easy reference while playing.

The following configuration of Star Wars characters preserves the essence of its narrative ambiance while maximizing design congruence with Chess gameplay:

Rebels/White
King: Luke Skywalker is the linchpin of the story
Queen: Princess Leia Organa is true royalty, capable of penetrating deep into enemy lines
Bishops: Ben Kenobi and Yoda are loyal keepers of the Jedi faith
Knights: Han Solo and Chewbacca are galactic pilots riding their starship steeds, always a step ahead of their enemies
Rooks: R2D2 and C-3PO's mechanical moves protect the King (Luke) by castling if necessary
Pawns: Rebel pilots are expendable in the quest to destroy the Death Star, but only one needs to succeed to win the game!

Imperials/Black
King: The Emperor is the scheming mind behind it all, awaiting the final confrontation with Luke
Queen: Darth Vader is a powerful Vazier plotting destruction across the Galaxy
Bishops: A Royal Guard for the Emperor, an elite TIE Fighter Pilot escort for Vader
Knights: Boba Fett and Greedo are mercenary pilots who show up in unexpected locations. In this game you get to decide who shot first!
Rooks: R5-J2 and Protocol Droids provide a mechanical counterpoint to the rebellion
Pawns: Death Star gunners are ready to shoot down incoming Rebel pilots

PLEASE REMEMBER TO SUPPORT - EVERY VOTE COUNTS! THANK YOU:)