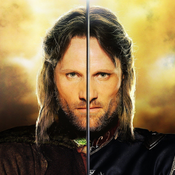 "You have but one question to answer ... How shall this day end"

Just like that quote this chariot didn't make the final cut of the Battle of the Five Armies but were in the trailer so there is no doubt that they will appear in the extended edition.

I know that it looks like Balin, Dwalin, Fili, and Kili are riding the chariot but seeing as though we've already got them in their regal armor I figured "give some of the others a go".

The chariot and fit 4 minifigures at the most and will be pulled by two war rams (given current pieces the cows represent war rams) and has two large spike on the wheel. it also appears to have some sort of arrow shooter on the front, in the trailer. So I put a spring loaded shooter to represent that. It's made up of mostly reddish brown bricks with some gunmetal grey.

The orc catapult wasn't seen in the movie either however I am confident that they would have had something like it. It isn't spring loaded or any sort of automatic firing you just have to apply pressure on the front part and it'll fire. It is on wheels so if you have a few orcs or the cave troll it can be moved.