By LuisPG
162 comments
Welcome to the LEGO Air & Space Museum!
The original version of this project, built with real parts, won the Grand Prize in the minifigure category in the contest “Your Build in the World Famous LEGO House” and will be on display at the LEGO House in Billund, Denmark, between September 2020 and September 2021.
Since then many people have told me that they would love to see this model as a LEGO Ideas project. That is why I built, this time using Studio, this new version, making some improvements and modifications, but keeping the architectural features. I had to change some of the models on display, so that they all complied with the LEGO Ideas rules, but the general concept and most of the details remained. 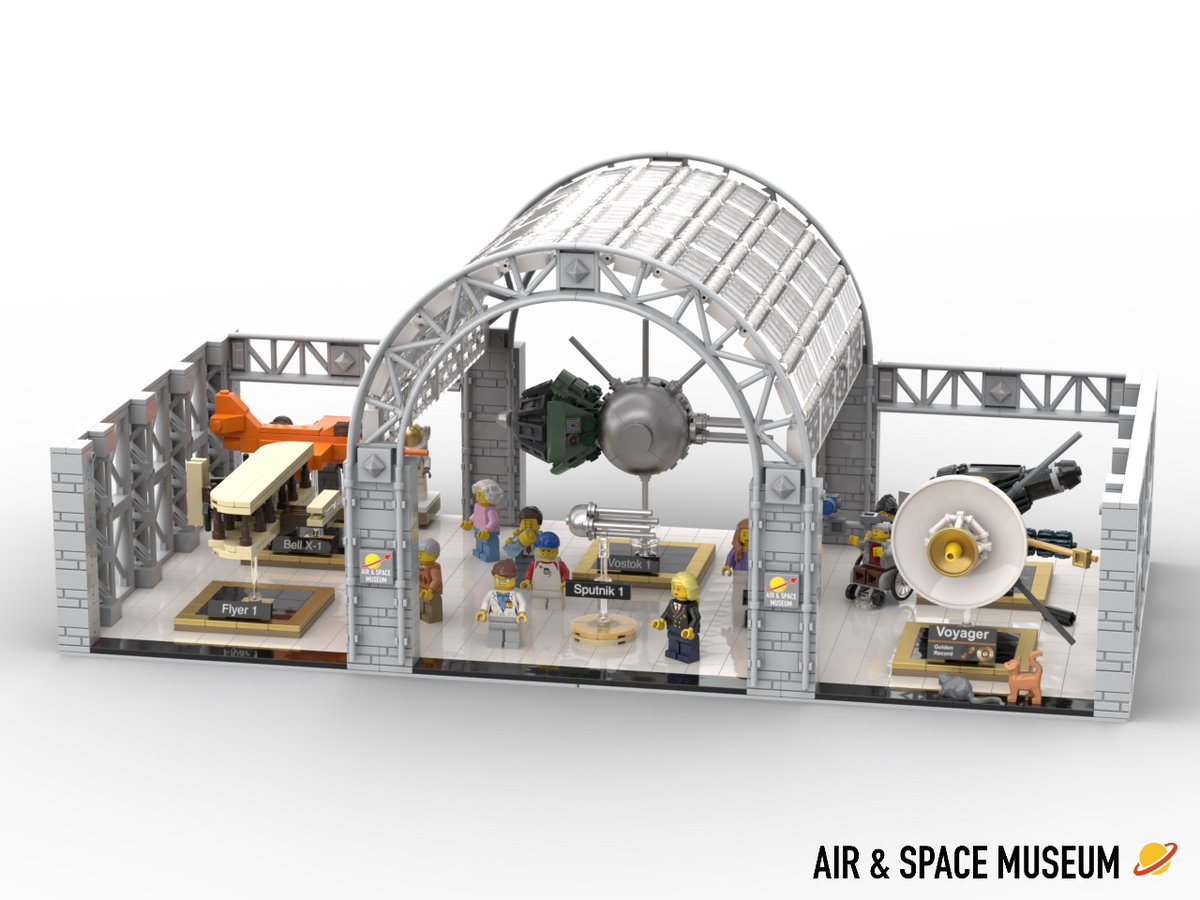 To build the museum building, I was inspired by the Smithsonian Air and Space Museum in Washington D.C. and the Museum of Aeronautics and Space in Santiago de Chile (the city where I live).  The ceiling of the central section is built mainly with transparent pieces that allow more natural lighting to the content of the museum.  The main challenge of this part of the project was to achieve a smooth, realistic and aesthetically attractive curvature. The roof of the central section can be easily removed and thus all the interior of the Museum can be appreciated.  I left the side sections without a roof, to be able to expose the rest of the mini-models, as well as to easily access them to be able to play.  Although this is a model designed for display purposes, it can easily be integrated in a LEGO city, creating entertaining adventures with minifigures. 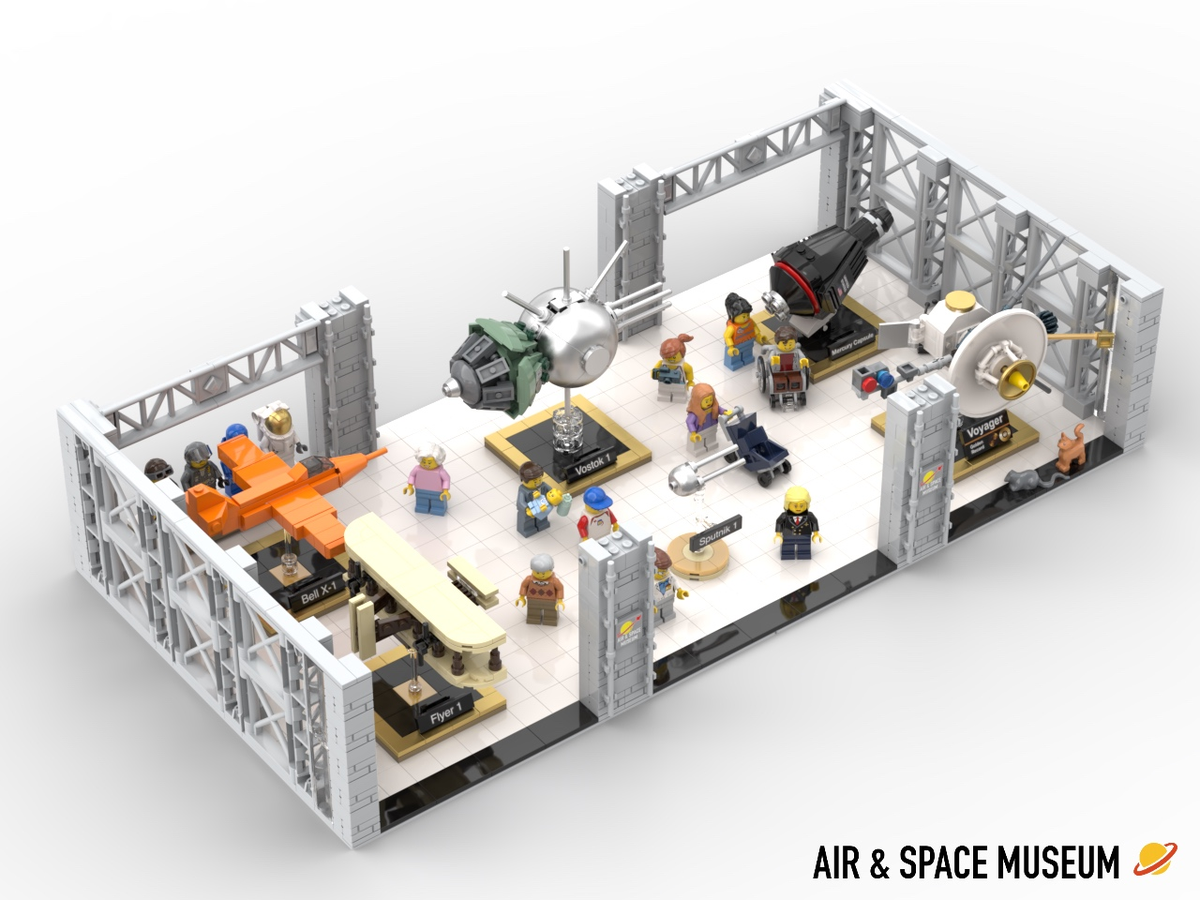 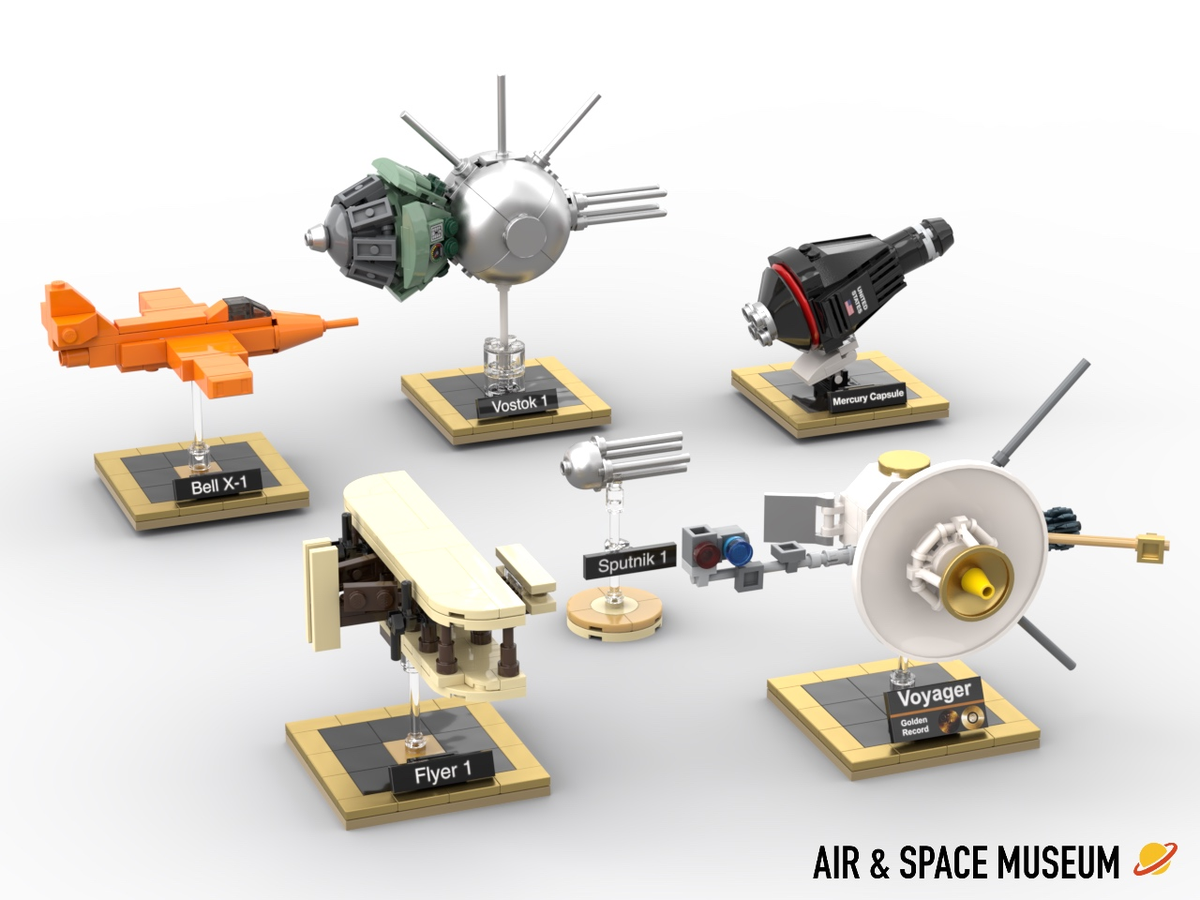 The mini-models are not all to the same scale, I built them so that they fit the space available in the building well and not exceed the limit of 3000 pieces of LEGO Ideas.  The selection of them took into account that they marked relevant milestones in the history of aeronautics and space exploration, without a doubt other important models could be added, but some had to be selected and I opted for these.
Instead of being just a collection of mini-models, I believe that incorporating them into the building and under the unifying concept of the museum, gives the project much more conceptual and aesthetic value.

Also included in the project are various minifigures, including museum staff and visitors, as well as a collection of flight suits and spacesuits.
The mini-models featured in the Museum tell us their history, they tell us about science, technology, adventure, exploration and discoveries, and all of that is wonderful, educational and entertaining, so I think they would make an excellent official LEGO Ideas set.
Total piece count: 2205 pcs
Width: 20 inches (51cm)
Length: 11 inches (28 cm)
Height: 9 inches (22 cm)
Thanks for your support!
This project could become an official Lego set if it gathers 10,000 votes. Voting is easy, free and without any obligation, you just have to press the blue button "Support". If you do not have an account on LEGO Ideas, you must register, you will receive an email to activate your account and then you can already vote.
Thank you very much for visiting this project.
Kind regards
Luis
You might want to take a look at these other projects on space exploration:
Hubble Space Telescope
Voyager
Alma Observatory Antenna & Black Hole
In the following link you can find my original Air and Space Museum project that won the “Your Build in the World-famous LEGO House” in the minifigure category in 2020.