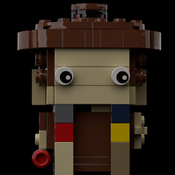 Hello Lego fans,
I have designed a fleet of 4 vintage trams, all from the early 20th century. They are all based on trams which can be found at the Crich Tramway Museum, where they have been restored to full working order. From left to right of the first image there are; Leeds 399, Sheffield 74, Blackpool 166, London 159.
The trams feature a modular design so the roofs and different decks can be easily taken off to see the insides. They are built using the Lego train wheels so they will run on a standard track, and they can be easily modified to run using motorised wheels so that they will actually drive around the tracks. Minifigure drivers and conductors can also be added on studs which are sporadically placed around the trams.
These would be a great addition to any Lego collection, or can be embedded within a city, or can be standalone models. They are versatile in how you want to use them.
I have been interested in trams and Lego from a young age so combining the two is something I've wanted for a long time. I started with building just the one at first and then went on to build three more. Many trams feature interesting shapes which was fun to try to work out how to replicate these shapes in Lego form.
More information, and the history about each tram can be found on the Crich Tramway Museum website by following these links to each tram's page;
Leeds 399
Sheffield 74
Blackpool 166
London 159
The models were built in Studio and I used their Part Designer feature to create the stickers for the numbers, and other designs which are on the trams.