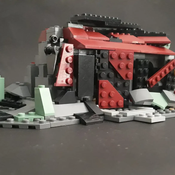 By LightBolt
19 comments
Hi guys,
This is my very first LEGO build for LEGO Ideas, so I really wanted to build something which has some sort of Medieval factor, and I came up with this.
This build is an abandoned medieval house. In medieval times, wealthy people had houses made of stone, and even wealthier knights had towers, and this is a house around the knight tower. It has two major factors. The actual house and the tower.
The house:
The house is done in dark grey, light grey and black pieces. The house is abandoned and things like the collapsing roof with the broken red tiles, the crossed beams and the fallen knights' emblem (these things also look pretty cool) show that the house is abandoned. The reason why I did this was, many other ideas have houses that are "standing up", so I wanted to do something different, and making it look abandoned is way cooler. Other cool factors are the inward window and the patterned door. The house also has rocks going from the house, which gives it that medieval effect.
The tower:
As I said, this abandoned medieval house once belonged to a knight, which meant that he had to have a tower. The tower is three layers (bricks) taller than the house, and is only done in dark grey and light grey pieces. The tower has two greenish big shields looking elements on the front side and right side of the tower. Like the house, it has factors like the top pieces slanted to show that it is abandoned. A red vine has grown on the side to show that it has aged.
I hope that this will encourage you to support this. As you know this is my first build so, please write down in the comments if you want to see me build something else. Please support this, and consider writing a comment. That's all, thanks.