By SenatorBlutarsky
26 comments
This model is a 19-axle superheavy transport rig. If you've ever seen one of these rigs roll down the highway, you'll probably never forget it. This set in particular (including the color scheme) is based on a configuration that is operated by the Hallamore Corporation (based in Holbrook, Massachusetts, not too far from where I live). Transports of this type are typically used to move heavy equipment for the power and mining industries, such as transformers, wind nacelles, hydro-electric turbines, nuclear containment vessels, and parts of large excavating equipment (such as bucket-wheel excavators). The idea behind these transports is to spread the weight of a heavy load so that the per-axle load meets the permit requirements for highway travel (i.e. so that the transport doesn't tear up the road).

There have been a few offical LEGO sets with heavy haulers, including the 7747 Wind Turbine Transport and the 7900 Heavy Loader, but I don't think there is anything quite like this model. It is built at minifig scale and it is almost 200 studs long -- that's about 1.6 meters! This model would pretty much grind those existing sets under its wheels :-). I have put a length comparison graphic in the main graphic to make it easier to visualize the difference.

Below is picture of a real 19-axle transport in action (not Hallamore's unfortunately -- I couldn't find a good picture of theirs). 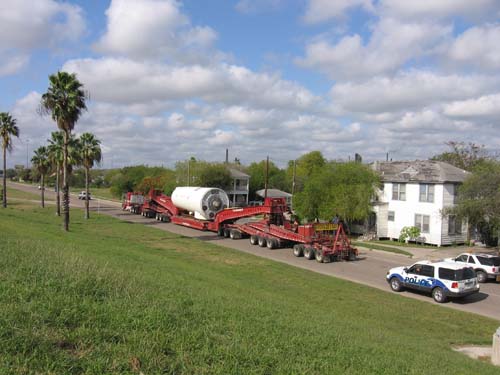 This set is loaded with detail and functionality. It includes the tractor, the 15-axle trailer, two escort trucks, a large wind turbine (the cargo), and five minifigs. I am going to have a hard time doing it justice with just the few pictures here.

Let's start with the tractor. It is based on a 50-year-old Mack M-series truck that is meticulously maintained and operated by Hallamore (although I have chosen to build a 3-axle model, and I think Hallamore only has 2-axle models). The M-series trucks are pretty much the epitome of what a truck should be: big, ugly, and powerful. The truck is 10-wide (that is to scale -- the M-series trucks ranged from 10 to 16 feet wide) with two working features: steering via a HOG knob on top of the cab and a working drop axle that is raised/lowered via a knob behind the cab. The picture below shows the fronts wheels and drop axle in two different positions. 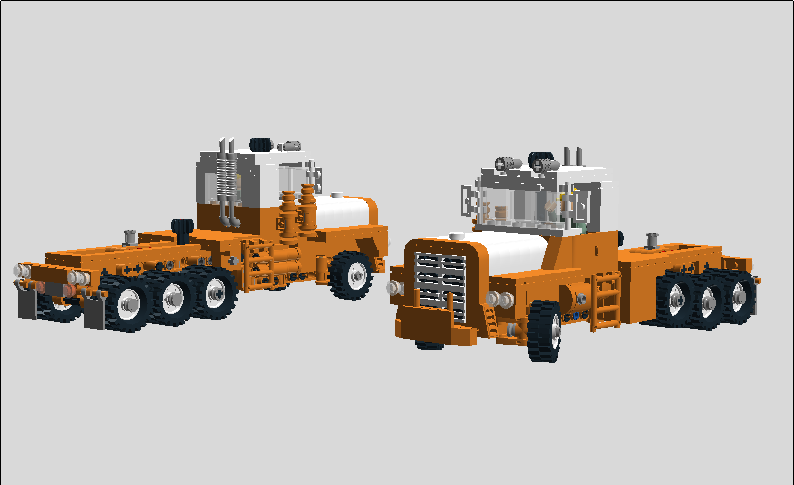 Here's a picture of the Hallamore truck on which this model is based: 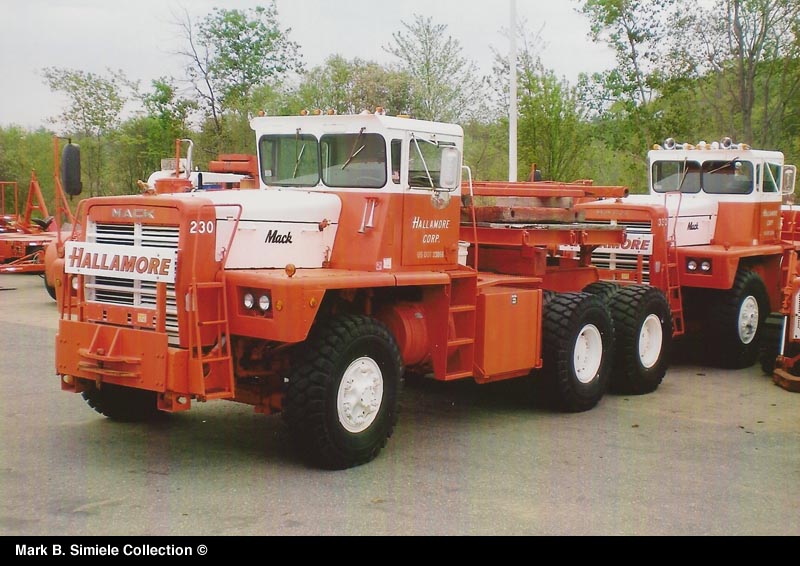 The trailer is based on a 15-axle Trail King 175-ton trailer. Believe it or not, it is only Hallamore's "mid-size" heavy haul transport. They also operate a 32-axle, 400-ton rig.

All of the gooseneck couplings on the trailer have two degrees of freedom (they can swivel and tilt front-to-back). Also, all of the trailer axle groups except for the front one have hydraulic steering. I have simulated these steering mechanisms with friction rams. There are two operators, one situated on the front of the trailer and one at the back, to run the hydraulic steering mechanisms. There is also a drawbar attached to the third axle group (the one immediately behind the flatbed). This drawbar may be attached to the flatbed for highway travel and then, when tight maneuvering is required, unhooked to allow the axle group to be steered independently.

The structural components of the trailer are composed primarily of cantilevered technic beams, so the trailer is fairly robust. 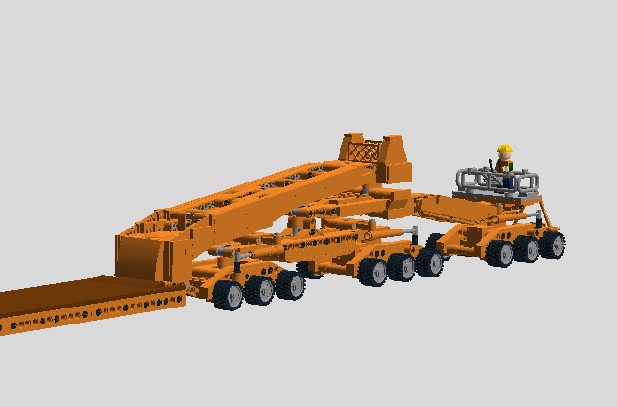 Additional picture of this model are available on my Flickr page.

If you like this project, you might also like some of my other projects, including:
F/V Andrea Gail
UCS Double-Ended Ferry
New England Fishing Village
Busy Micro Seaport
Apollo-Soyuz Mission
Nutcracker Figurines

Thanks for taking a look at this idea!