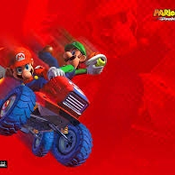 Hast thy golf ball been caught by yonder sand ensnarement? Use thy sand axe, and liberate it from the ensnarement's clutches! But have a care not to break the castle windows, for the lord of the castle shalt be not a little angry, and thou wouldst do well to be sore afraid.

This project seeks to produce part of a medieval golf course. (The concept is whimsical and unrealistic, but you must admit it is creative.) I wish for one hole, two knights, and perhaps a caddie. The castle one is the main idea, and the one with the ruins is just an example of a variant design.

Now, for the FAQ.

Why are the knights holding axes? The axes are the golf clubs of the time. The guy with the cart of weapons in some of the photos is a caddie.

Is this an original idea? Yes. This was originally a MOC I entered into the Rebrick Curator LEGO Movie competition.  The prompt was to create something that went with various worlds in the LEGO Movie, one of them being Knight's Club.(This was several months before the movie's release) So LEGO came up with the words "Knight's Club" and I made this MOC. This was not victorious, so I believe I have the legal right to post this.  I do not intend for this as a project to be connected with The LEGO Movie, rather, for it to be its own separate thing.

Thank you for reading.