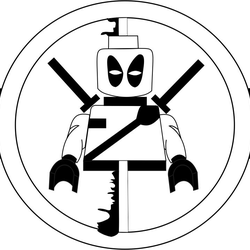 Description: The Night Hornet is a unique transforming terrestrial star-fighter which can be customized.  This versatile Space/Air Craft termed SAC, is a defender belonging to the Global Stellar Defense Command (GSDC) which operates under the direction of Earth’s Unified Federation (EUF), which is the main body responsible for protecting the planet from domestic and foreign threats.  The Night Hornet is classed as a Special Operations Protective Element (SOPE) unit with a specific designator (e.g. Alpha (A), Bravo (B), Charlie (C), and Delta (D)) which has a unique mission.

Features: The vehicle is a variable-wing aircraft with turbo-props and is powered by a futuristic hyperdrive system.  The aircraft transforms into a starfighter when the props are recessed back, parallel to the airfoils and the light-blue main jets are activated.  Micro light blue jets control the main body hub in the 3D space environment while the remote drone has been detached for use. The turbo-props control the vehicle while maneuvering within a tangible atmosphere such as Earth’s.  The SAC has red and green navigation lights and a rear white strobe for easy right-of-way recognition.  The main body includes variable step pads for minifigures and transport, two high-frequency radio antennas, a large high-def camera and radar center on the right, and two operable mounted weapons on the left.  The center mounted white light is a powerful laser weapon capable of emitting light and electromagnetic counter measures (ECM) to disable threats.  Both the Drone body and main body include a dual-laser weapon mounted under the nose.  The flight deck has a futuristic heads-up display (HUD), computer/radar screen, and yoke.  Finally, the main body also has several connectors to mount minifugure tools.

Why I built it: I am a passionate AFOL and proud of it!  I love LEGOs and got my son (soon to be nine years old) into creations with the intention to turn him into a KFOL!  We spend hours creating scenes from our imaginations and he always asks me to make him something for his minifigures.  So, I do and this proposal is the most recent which was inspired by my love of aviation, space, and scifi.  I always tell the story to my son about when I was a bit older than him, how I used all my LEGOs to create an awesome helicopter which was inspired by the super-copter from Air Wolfe movie and series back in 1984.  Some of the best reasons why I like LEGOs is that working with them is very therapeutic and calming.  I love the LEGO culture and the values which LEGO family lives by!  It is not just a toy but a professional tool and safe outlet for anyone.

Why I believe the Night Hornet would make a great LEGO set: Who doesn’t love a futuristic space ship?  Many children and adults alike love to imagine that the Earth could be threatened by an extraterrestrial space culture seeking to exploit our weaknesses to take valuable resources or just to enslave the human race.  Even just a versatile spacecraft to explore is so cool! Many people, like me, have grown up watching movies, television series, and read scifi books featuring spacecraft and imagined they were there too. In the age of technology, the Night Hornet is the tip of the spear in design, maneuverability, customization, and stealth against any extraterrestrial curiosity.