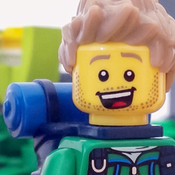 The Iron Wolf is inspired by the Lego Creator Series. I wanted to see how far I could take my creativity into creating an organic beast character with Lego bricks. The beast shouldn't look too scary but at the same time have striking proportions and graphic appeal for a beast!

It was important to me that the Iron Wolf had enough movable parts to set in different poses. Even his ears can rotate close to 90 degrees vertically up and down. His jaw can open and close. His legs rotate sideways and knees can rotate forward and backwards. The arms can rotate up and down and the forearms have ball joints. The two front fingers on each hand bend forward or backwards. The head can rotate into any direction.

To be a potential Lego set I kept the scale realistic. The model is 14cm high and would easily fit into a medium sized Lego box. The Iron Wolf could be a collectors item because of his figurine size and graphic appeal. He will challenge the imaginations of those who dare to assemble him.                                       Most importantly I had fun designing and building Iron Wolf.