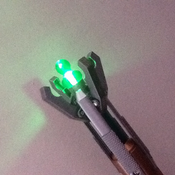 Fly away through the time vortex in the latest TARDIS Console with the Doctor and Clara!

This console is based on the 2013 TARDIS Console. This set contains a detailed console with lights, buttons and levers. Above, the time rotor with its transparent blue columns, is connected to the large silver spinning thingy that is covered with lights. At the console, two scanners have the ability to move up and down freely.

The walls are decorated with lighted roundels and hexagon shaped decor. To the side, the other panel thing seen in the TV show is covered with levers and lights, accompanied with a red chair.

Above the roundels are metallic arches that hold the structure up (of course, this console doesn't have a roof, so those arches are just for decoration).

The minifigures in this set are:

~The Eleventh Doctor with his sonic screwdriver

LOOK AT THE LAST TWO PICTURES...

If the 2014 Console were to be chosen, then the time rotor would simply be changed to transparent red and the base (between the Doctor and Clara) would also be changed red.

Also, Clara would be in black clothes with her hair down and, of course, the Doctor would be the Twelfth Doctor (Peter Capaldi).

I hope you like this set and I hope you support it! Thanks!