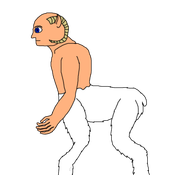 "In Norse mythology, Dökkálfar (Old Norse "Dark Elves", singular Dökkálfr) and Ljósálfar (Old Norse "Light Elves", singular Ljósálfr) are two contrasting types of elves; the prior dwell within the earth and are most swarthy, while the latter live in Álfheimr, and are "fairer than the sun to look at". The Dökkálfar and the Ljósálfar are attested in the Prose Edda, written in the 13th century by Snorri Sturluson, and in the late Old Norse poem Hrafnagaldr Óðins. Scholars have produced theories about the origin and implications of the dualistic concept."

"Dark Elves are usually closer to [fairies and elves that are wicked and cruel, or at least have a completely foreign idea of right and wrong], except [they] are organized as cities or civilizations and bent on evil, rather than "just" operating on an alien morality. [They] will...speak in [horrible, evil language]."

Dark elves, or Dökkálfar, are creatures from Norse mythology, underground-dwelling counterparts to the Ljósálfar, or light elves. They are described as having darker skin than their surface-dwelling cousins, although they are sometimes depicted with grey or even blue skin. Dökkálfar usually have white hair and are known for their violent, warlike ways and their matriarchal (woman-led) societies.

The myth of the Dökkálfar has undoubtedly influenced many other fantasy and even science fiction authors. From the Underdark-dwelling Drow of Dungeons&Dragons to the Svartálfar of the Marvel Cinematic Universe, these unique creatures have certainly left their mark on the world, even to the point that many have forgotten their roots in Norse mythology and assumed them to be creations of franchises such as Warhammer 40k or the Dark Elf Trilogy.

Another fascinating influence that the Dökkálfar have had on the world is their constant defiance of their place in the world. Dark elves will often decide to throw of the shackles of what is expected of their race and seek to do good in a world which hates them, which brings us back to the village depicted in this set. These Dökkálfar could seem, at first glance, to follow the expected cruel, warlike ways of their race, but if you look inside the housed you will find that they belong, in fact, to a painter and a sculptor-not exactly the professions of purely evil monsters.

It would be up to the child playing with this set to decide the fates of his or her dark elves, not merely to follow what is socially expected. To this end, the set is designed for easy play, with the open-backed houses allowing easy access to the insides. One house contains a sculptor with a chisel, who has come to the doorway to watch his queen as she journeys through the city, and the other contains an artist, brush still wet with paint, who is similarly captivated by the sight of the ruler of her city being marched right past her front door. Inside the houses, you will find a statue of an unknown elf from the past, as well as a painting of the queen herself. The crystals on the houses and on the queen's chariots glow in the dark, adding a subterranean feel to this set.

​You've already taken two minutes to read this, what's one minute more? Clicking "support" it quick, easy, and would make me very happy!