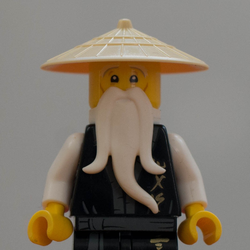 When my son got his first Lego set from my mother, we (his grandmother, his mother and I) helped him to build it since at that time he was still too small to do it on his own. That was great family entertainment! Later on my father brought him some older Lego sets which were not completely assembled. I built them for my son, who was still too young to do it himself. Since then I am as much into Lego as my son who in the meantime has become a quiet prolific builder.