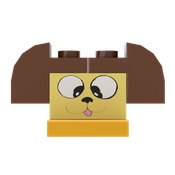 I liked Lego Bricks since i was a baby. Like every children I started from Lego Duplo.

My first Lego set was Lego 7990-Concrete Mixer. Since thenI was playing with big and small bricks.

When "The Lego Movie" was going to debut in 2014, I was soo excited, then I went to watch it. Later I wanted 70810-Metalbeard's Sea Cow. This set was really expensive, so i didn't buy it in time. I bought this set in 2017, when I started to save money.