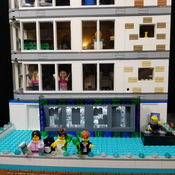 I started playing LEGO in the early eighties, took a break in the nineties. and came back in the two-thousands. I built with my daughter and later, when I reunited with my high school sweetheart, she bought me the Black Pearl set which brought me back. Building LEGO is my Zen. From September to January I display a city in my home that features the holidays during that time. It started on a single folding table and has grown to a 10'x10' area with builds from LEGO and MOCs.