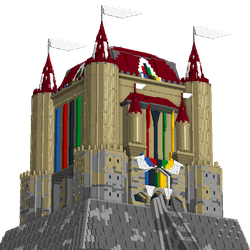 C.MechaBuilds
0
The trident is a Corvette transport class of space ship designed for hauling large amounts of cargo across the vastness of space.

The large wings and powerful engines allow for excellent stability as well as Maneuverability unmatched by any other ship of this size. The design takes it self from original 1889 Flexible Flyer seld design when it was realised that space and weight could be saved by using the wings as a form of landing gear.
The Trident holds in cargo near the middle to ensure stability and ease of being removed, this cargo can be a range of equipment that allows for base building when arriving to Mars, which can also include parts for a space station.
Further development of the Trident design could lead it to being a transport shuttle for humans to migrate to the red planet.
0