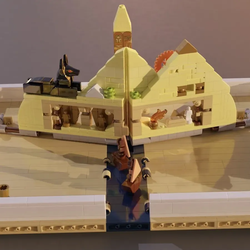 The structures and systems of ancient Egypt have marveled scientists to this day. Particularly the pyramids they wonder how these ancient humans were able to haul and cut blocks of stone weighing tones and carry them to the top of the pyramid. Today they are a engineering marvel and major tourist attraction (along with the hieroglyphics) and I've tried to include as many of these details as possible including the underground or interior tombs of the pyramids, a sphinx, the pyramids (of coarse), a river with boats traveling to the pyramids, and a tower with some hieroglyphics on it. Hope you like it :)
79