Teaching Aliens How To Build 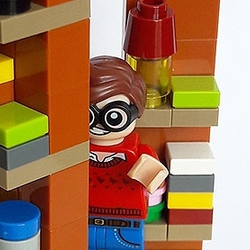 The aliens might know more things than us, but they surely don't have LEGO. So why not teach them how to build with LEGO.

Mike is our LEGO astronaut and he was sent to the Moon to meet 9 different aliens species. He brought with him 1 LEGO sets to show and build with the aliens.

The set contains a total of 184 pieces.