Here’s another guest post, this time with the minds behind the Big Bang Theory project, Alatariel (Ellen) and GlenBricker (Glen). Glen and Ellen often review LEGO sets, so they had an interesting time reviewing a set they inspired. 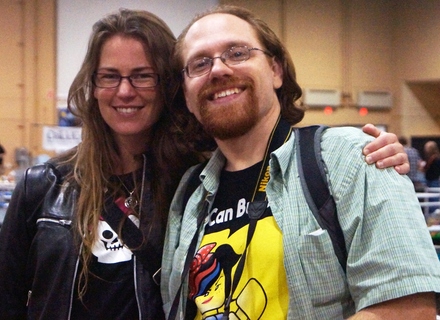 The two builders met for the first time in person at Brickworld: Chicago in June 2015. Prior to this, they had only chatted via email, IM, and Skype while working on the project. Here's the review, in their own words:

LEGO invited us to do a review of LEGO set 21302 The Big Bang Theory.  Obviously we can’t claim to be impartial as we submitted the project to LEGO Ideas and this is the resulting set, but we will do our best to approach this review with a critical and fair assessment.

Critical LEGO fans will point out that The Big Bang Theory LEGO set is simple, and they are for the most part accurate.  It is a basic apartment with shelves, a small desk, and some furniture.  The techniques used are rather direct; however, even a casual fan of Big Bang Theory can tell you that this set is a very accurate representation of the quintessential stage.

The challenges in this design are about recreating the apartment to Minifigure scale and dealing with the classic issues that lay within, such as keeping people from noticing that Minifigure feet don’t touch the ground when they sit ;) and the set does that quite well. 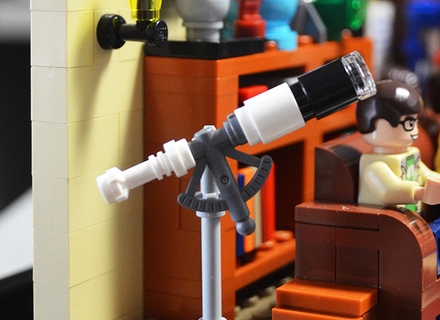 The true creativity in the set comes from the little gems that bring the set to life: the desk lamp, telescope, the black chair, and the curtains for example. 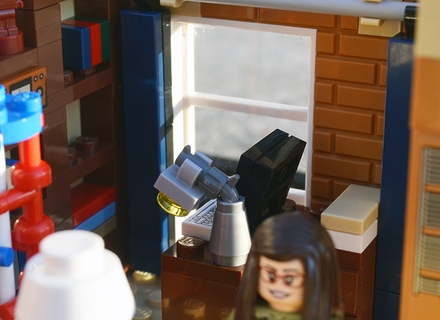 We would not be surprised to encounter these tiny details accentuating a variety of projects in the future. 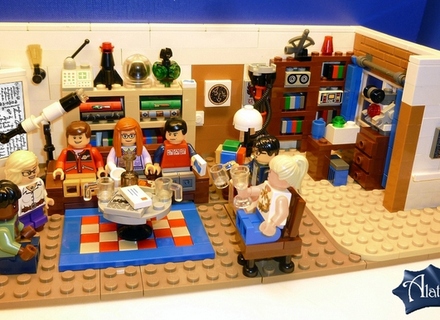 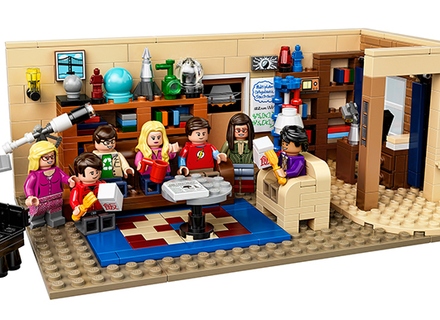 We were totally floored to see how closely LEGO and Warner Brothers kept to our original concept.  Certain licensed items didn’t make it, and that is unfortunate but understandable.  The DNA display is likely the biggest change.  Most of the subtle differences, we assume are due to part part/color availability.

Ellen, as a geoscientist, would have really liked to have had a printed globe.  Glen as a serious comic book fan was really hoping for printed “nanofigs” but accepts that their lack of branding makes them more useful.

Photos just don’t do this set justice.  One of the very novel things about this set is the density of content and openness of the build.  The individual elements are not complex or advanced, but when you have it in front of you, it really comes to life!  The build has a level of depth that is unheard of in traditional LEGO sets.  As you view it from a variety of angles it just really pops out at you. 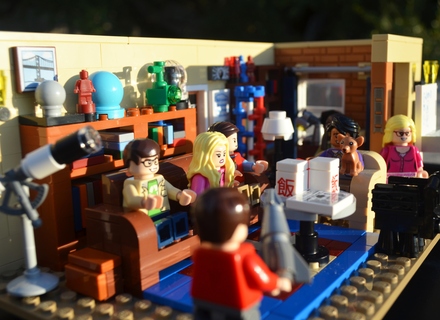 Of course, The Big Bang Theory is not about an apartment, it is about the misadventures of an ensemble cast.  This set showcases SEVEN figures!  We were so thrilled that LEGO included every major cast member from the show and it is very cool that this set expands the diversity of LEGO Minifigures.

The figures in the set excellently portray the iconic styles of the cast with their torso prints, facial expressions and hair selection.

We were extremely happy to see that Sheldon has two tone arms (long blue sleeves with short red sleeves) and his iconic Flash t-shirt.  It was a little disappointing that he did not come with the extra-long legs but the expert way in which the artist captured Sheldon’s disgruntled and giddy expressions more than makes up for it.

Of the remaining characters, Howard and Raj are closest to our original submissions with Howard even having a game controller inspired belt buckle!  The “Weasley” hair from early Harry Potter matches Howard better in our opinion but that would have required bringing back a very singular part.

Penny is perhaps the most different.  We would rather see her in short sleeves or bare arms to help give her figure some more visual distinction. 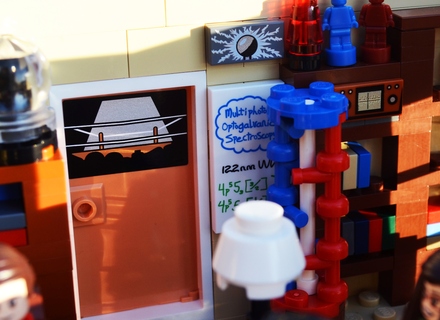 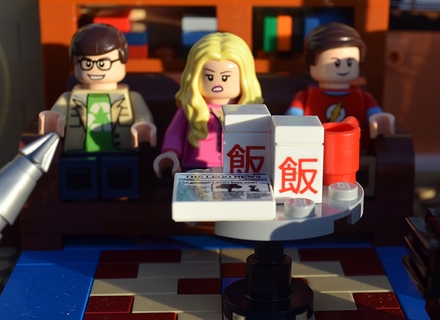 The whiteboard with Pictionary on it is a fun call out to the show.  For those still trying to figure it out we won’t spoil it for you here, but we will tell you it is from episode 3,13 “The Bozeman Reaction.” 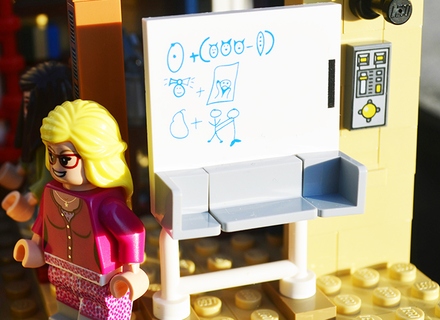 One of the stranger aspects of the set is the picture on the closet.  The original art is a painting inspired by Dempsey and Firpo by George Bellows in which classic popular toy robots have replaced all the humans in the original painting.  What a licensing nightmare!  This picture is replaced with depiction of an empty boxing ring which is a little unusual.

This set hits its goal spot on, recreating a famous apartment and an iconic cast.  The straight forward nature of the design, while utterly accurate, might leave some non-BBT-fans wondering what all the commotion is about but the finer details should appeal to even the most reserved LEGO fan.

Editor's note: In case you missed it, watch the video of Ellen and Glen talking about how they collaborated on the project: